Following Kenny Omega's win over Trent Barreta, a video started. For one split second - as it was playing - I thought 'this looks a bit like a Chris Jericho vid from WWE' and I should have expanded that thought simply because Jericho and Omega had been having a war of words over Twitter recently.

Anyway, that split-second thought was easily disregarded because Jericho has been a WWE guy since 1999 and I thought Omega and Jericho were working their own angle for a match that would take place on Jericho's cruise that he's promoting for October 2018.

Within moments, Chris Jericho appeared on the screen and challenged Kenny Omega to a match at WrestleKingdom 12, which will take place from the Tokyo Dome on January 4th. 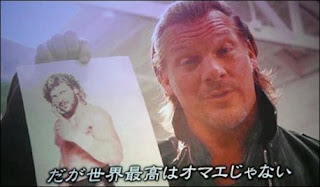 As I wrote above, despite taking time off to do other things outside of wrestling, Jericho has been a WWE guy since the 20th Century. I never thought that he would do anything for another company again, so was totally shocked to see him on the screen.

I am glad I saw the reveal live. Even though I would have been stunned to read it in the news later in the day, you cannot top seeing something like this as it happens.

The bout will be for Omega's US Championship.
Posted by David Taylor at 8:22 AM