The day started off well.

Until I decided to check my mobile phone was working properly.

I don't even know why I thought I'd test it, but I rang from the landline and was met with a dead line. 'Hmmm,' I thought. So, I tested it on the second home landline.

I ended up calling my network provider. We went through all options and then reached the decision to restore all the setting in the phone. He warned me that I'd lose my wallpaper.

I have had the same background on the two sets of iPhones that I have had since 2010. It was the frog that looked like this: 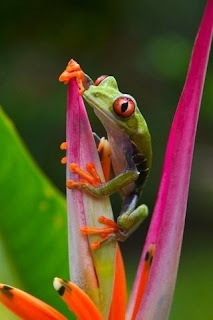 I've kept the image for seven years. I knew it was unavailable on the new model, but it moved across when I updated. I knew there would come a day when the background would end up having to be changed. I didn't foresee it being today.

I tried to put the image back on the wallpaper, but the colour wasn't the same. It was bright before. Now.. not so much.

Bottom line - this isn't the big issue of the day. I still can't phone my mobile from a landline.

They're working on it. Apparently, after I called in with the issue, many others have came along.
Posted by David Taylor at 2:21 PM