I've just finished watching this year's WrestleMania and - as I predicted - Roman Reigns defeated The Undertaker in the main event and more or less retired.

Following the conclusion of the match, Taker was back in his coat and hat. He stood there as his music played and then took off his gloves before laying them in the centre of the ring. His coat came off next and it was rested on top of the gloves. Finally, the hat came off and that too was left in the ring as he walked away. 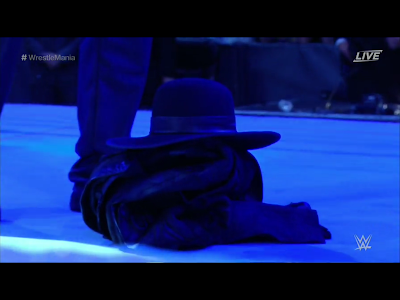 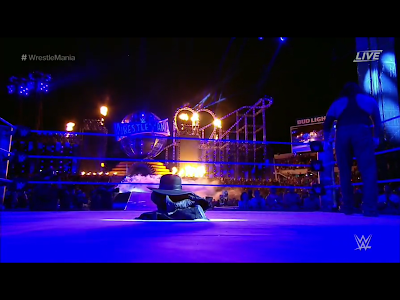 The Undertaker wasn't my favourite wrestler, but he has obviously been there for nearly the entire time that I've followed American wrestling. I started following WWF in the late 1980s and Taker made his debut in 1990.

With that said, he is one of the participants in my favourite match ever (his Hell in a Cell match against Shawn Michaels).

As I am typing this up, I actually do have a funny Undertaker story and it involves my best friend.

When Undertaker debuted, he did so at the 1990 Survivor Series as a mystery partner on one of the teams. I can recall standing outside the tuck shop at high school (was my first year at school) and got talking to this kid in my class. I didn't know him too well but we were both talking about wrestling and I recall that conversation was all about guessing who the mystery wrestler would end up being.

We wouldn't have known as The Undertaker was a new gimmick.

Anyway, years later me and that kid became even better friends and still are to this very day.

Another memory I have is the time I met him in 1993. I had my photo taken with him and it still makes me laugh. He's towering over me in it.

I've just sat through seven hours of WrestleMania. I watched so much, but the closing images of Taker walking away are what I'll remember the most about it.
Posted by David Taylor at 5:53 AM