I have written before that whenever my nephew is around, he likes to watch Youtube (or 'New Tube' as he calls it) videos with me.

Well, to be fair - I'm watching them with him as he has full control over what he wants to watch.

His most popular choice has been watching children opening new toys. He particularly enjoys watching Fisher-Price Imaginext openings where the youngsters are playing with Marvel and DC Comics playsets.

I have bought him a few of these Spider-Man and Batman sets over the years but there was one figure that has been hard for me to find over here in the UK.

It's a character from the Batman toys and his name is Clayface. My nephew will not stop going on about wanting this toy.

'Clayface is hard to find' he would tell me. Probably on a tip from my sister who has also found it difficult to find one. The most funniest line he has ever told me when discussing the baddie's unavailability in Great Britain is 'you can only buy them in Africa'.

Knowing what he meant, I had a look to see if it was possible to purchase the toys from America.

And I found them!

I had a look on Amazon and it worked out at around £15 including delivery. A look at the UK Amazon website also worked in my favour.

They British side of the store wanted £23 for one.

I obviously went with the US option.

It arrived this past weekend. Here it is in all its glory. 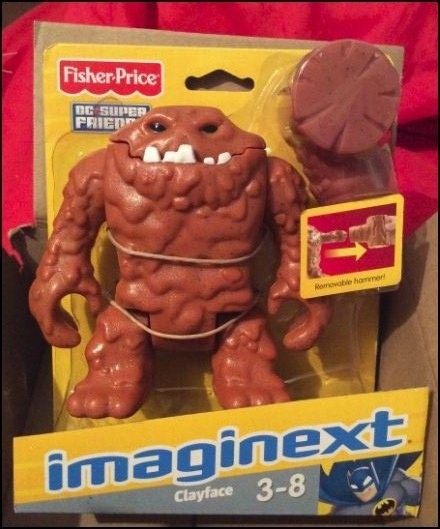 I'm going to wait until Christmas to give it to him, but I cannot wait. I can't even put into words how much he has been wanting this toy for his collection.

The scary thing about it all is, I don't know how it took me so long to work out that I could have had it shipped from Amazon US.

Here's a range of Batman Imaginext toys available from Amazon US
Posted by David Taylor at 12:00 AM