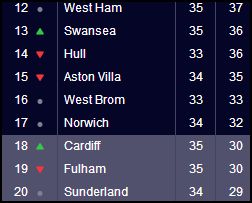 I've written about it many times on this very blog in the past, but I'll write it again right now.

The relegation fight at the end of the Premier League season is often always more dramatic than what's going on at the top.

And this year my attention on the bottom three has been more intense as it's Cardiff City in football's fatal four-way.

I really want to be wrong and see Cardiff escape this but I cannot see them getting enough out of the next three games.

They have two games away up north (Sunderland and Newcastle) and then play Chelsea in the final game of the season which may be just as important to Chelsea as they try and claim the title.

I hate to say this, but I hope Liverpool win the league before the final day.
Posted by David Taylor at 12:00 AM