It's a little under a week since the NFL game between the Detroit Lions and Philadelphia Eagles that was contested in wintry conditions and I thought I would offer up my thoughts on it.

I sort of  liked it.

It's easy for me to say that as I watched the game from a warm bedroom. However, there is something unique watching a game being played out in this manner.

I found it hard to see what was going on in the early stages of the game as the picture below indicates: 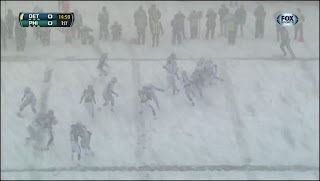 It was easier to see what was going on as the game progressed: 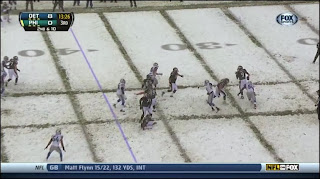 All-in-all watching a football game in snow is interesting but it's not something I would like to see being played out every single week.

I would not like to see a Super Bowl being played in these conditions.

Are you reading, Mother Nature?
Posted by David Taylor at 12:00 AM