Judging A Book By Its Cover (And Publisher) 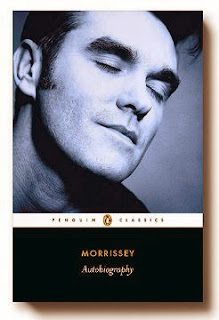 I was looking through the junk email folder on my Hotmail account on Friday afternoon and came across mail titled with 'Morrissey Autobiography' in its subject line.

The first thought was to assume that Morrissey was releasing a new album titled 'Autobiography'.

The second was to ponder why the email landed in the junk folder.

I haven't been keeping up with Morrissey news lately, so - after reading the email - I found out that it was indeed a book that he was releasing.

I tried finding it on Amazon but it was not listed. The reason why was due to the book having been pulled initially after a clash between the author and publisher - Puffin Classics.

Morrissey and Puffin settled the differences and the book is now set for an October 17th release.

It's intriguing to see the book published by the Classic arm of Puffin. The picture of Morrissey with the Puffin Classics-style cover is kind of cool.

Even more intriguing is the fact that Morrissey is releasing his memoirs after years of refusal (pun intended).

Something tells me this book will be quite the controversial topic when it comes out.

I had a check yesterday morning and Amazon.co.uk now has it listed.

I've preordered my copy. Expect me to blog about it once I have read it.


The book has yet to get a US publisher.American fans can get it shipped from Amazon.co.uk
Posted by David Taylor at 12:00 AM