Former boxer Tommy Morrison passed away over the weekend.

Morrison was a former WBC heavyweight champion having defeated George Foreman in a 1993 title fight. 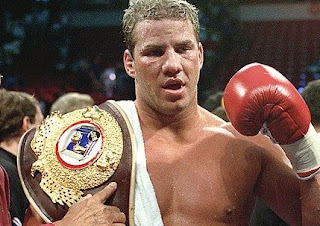 His nickname of 'Duke' was in reference to his claim that he was a distant relative of John Wayne.

If the title win and the trivia note about his genealogy didn't make him a household name, there are two other things that could have.

Gunn was a student of Rocky Balboa and ended up turning on his mentor after being lured by a promoter. Rocky V has been panned by many critics, and even Sylvester Stallone hates to talk about it. I have, on this very blog, been a defender of the movie as I enjoyed the story.

The other thing that Morrison will be remembered for is how he was forced to leave boxing after being diagnosed as being HIV Positive in 1996.

He controversially returned to the ring in 2007 and 2008 after getting cleared to fight by Texas. The two fights resulted in wins giving him a career total of forty-nine wins and three losses.
Posted by David Taylor at 12:00 AM