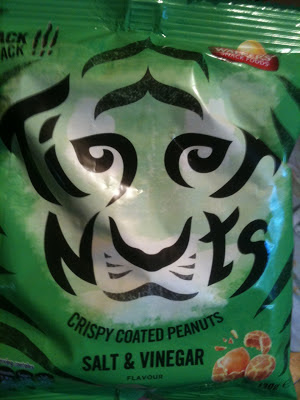 I've noticed a lot of online and radio advertising for Walker's new Tiger Nuts so decided to buy a packet (or two) just to see what they were like.

I bought the Smoky Bacon and Salt & Vinegar flavours and - at the time of this getting published - I've only tried the former.

They weren't too bad.

I'll probably try the other two flavours (Chilli and Curry) if I get a chance.

The reason why I am mentioning them in today's post is because it took me a while to figure out how great the logo is.

I knew they were called 'Tiger Nuts' and had seen the logo on the advertising. I had even noticed it on the packets but it took me a while to figure out the clever work that has gone in to making the tiger face out of the wording.