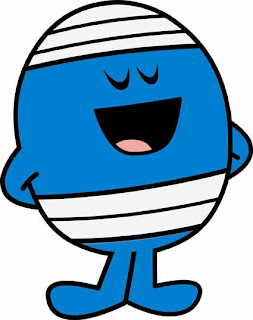 I visited the Google website today and it seems that - for today - they are celebrating the life of Roger Hargreaves.

The Google 'Doodles' have been decorated to incorporate Hargreaves' most famous creations The Mr. Men and the Little Miss' as a way to honour what would have been the artist and writer's seventy-sixth birthday.

My favourite Mr. Men character was Mr Bump. I'm not really sure why other than, back when I was younger, I didn't think he got much respect.

The nursery and infant school I went to had a selection of Mr. Men books but Mr. Bump never found it to be alongside the other titles in the library. I also recall hardly ever seeing him in the short cartoon series we would watch as children. I would tune in hoping that the episode would feature the bandaged man but my hope was in vain.

In recent years, I am glad to see he has been afforded a place on children's plasters. But, it is a little too late for me.

Why didn't they do this when I was a kid!?

I would have loved a Mr. Bump plaster on a grazed knee.
Posted by David Taylor at 9:18 AM